Magpies seem to be jacks of all trades – scavengers, predators and pest-destroyers, their challenging, almost arrogant attitude has won them few friends but I really like them. With its noisy chattering, black-and-white plumage and long tail, there is nothing else quite like the magpie in the UK. When seen close-up its black plumage takes on an altogether more colourful hue with a purplish-blue iridescent sheen to the wing feathers, and a green gloss to the tail. I think that it is the colouring that is so appealing to me. 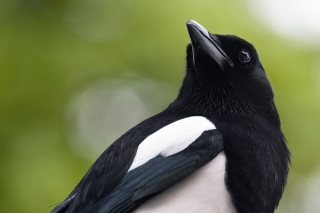 I grew up with the TV programme ‘Magpie’ and always remember the title song that went with it. ‘One for sorrow, two for joy, three for a girl and four for a boy. Magpie etc etc…’ now whenever I see them I always sing the tune and count how many I see.

We have nesting in our sycamore tree a pair who have successfully bred the past two years. They moved into the nest that 2 crows had been using previously but continued to make the nest extremely high-sided. It is well up in the top of the tree and it was already quite a large nest but the magpies kept getting large twigs and making it even bigger. They were taking no chances of their baby falling out.

Only once have I been cross with them. I had bought a diamondback sturgeon about 4-6 inches long and had only had it in the pond for a few days when I noticed a magpie dive down into the pond and take it up in it’s beak. I ran outside and made it drop it back into the pond where after a few moments of shock the fish swam away. Within a few days of that happening the fish was no longer in the pond so I guess the magpie made a better go of it the next time. I didn’t realise they ate fish. They have such good sight as it was the only dark coloured fish in the pond yet it was taken when all the other brightly coloured fish were left behind.

Our sycamore tree is at the bottom of our garden and our ajoining neighbour wanted to take off quite a lot of the branches of the tree. I said no because the birds were nesting. My neighbour was not happy with us and said if it was the magpies they were vermin and it didn’t matter about them. I told him that it mattered to me and wouldn’t let him do it. Of course I also told him that the blue tits were also nesting. So far he hasn’t mentioned it again.

We have just the one pair that are breeding but non-breeding birds will gather together in flocks. It is always lovely to see a new life starting out. They have only had one offspring each year but looked after it well. I am not sure how many they can have each year but we can only hope for better.